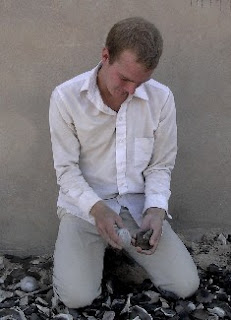 News sources are reporting that government collaborator Ian Wallace has been sentenced to three years in prison after accepting a federal plea deal. Wallace was involved in an ELF cell based out of Rhinelander, Wisconsin that included SnitchWire hero Daniel McGowan (who famously stood as one of six of the fifteen apprehended in the Northwest green scare cases that didn't talk to pigs or give up friends, bust him out soon!) in an attempted arson on a US Forestry research laboratory on the Michigan Tech University's campus. The sentencing for the group, according to the Midwest Green Scare, is as follows (red names mean public shunning is in order):

According to various news sources, Bryan Lefey (aka Bryan Rivera) and Katherine Christianson have both been sentenced for their roles in a 2000 ELF action at a US Forest Service research facility in Rhinelander, WI.

Lefey, who to our knowledge took a non-cooperating plea agreement in November 2008, was sentenced to 3 years in prison.
Christianson, who took a cooperating plea agreement in November 2008, was sentenced to 2 years.
Both have been ordered to pay restitution.
In December 2008, cooperating codefendant Aaron Ellringer was sentenced to four days in jail for his role in the action.
Snitch Ian Wallace, who’s cooperating role in the investigation is believed to have spurred the Rhinelander indictments, admitted his involvement in the Rhinelander action in a September 2008 plea agreement relating to an attempted ELF arson at Michigan Tech University in 2001. In exchange for the plea, he will not be federally prosecuted for his role in Rhinelander and other ELF actions. We believe that Wallace has not yet been sentenced for the Michigan Tech action.
Green Scare prisoner Daniel McGowan- currently serving a 7-year sentence- was also involved in the Rhinelander action, but will not be prosecuted federally for it as stipulated in his 2006 non-cooperating plea agreement. McGowan has steadfastly refused to cooperate in the Rhinelander investigation, and in summer 2008 his federal sentence was suspended for a brief time while he was held in civil contempt for refusing to testify before a grand jury about the action. (ed: fuck yeah)

It should be reiterated any time one of these cases is in the news that the A/ELF has never claimed a life, human or otherwise. They've racked up one hell of a damage bill, and one can't help but admire their effectiveness and constant threat of attack. The United States government considers them to be the number one domestic terror group in the country, which really proves how much corporate interest is invested in every facet and level of government.

With such a resurgence in autonomous yet fairly widely publicized property destruction in the United States, it's likely a matter of time before the "Green Scare" tactics are used outside the process of prosecuting activists and introduced into the police state entirely. The UK, known for being about ten to fifteen years ahead of the US when it comes to totalitarian surveillance, is training a network of 60,000 civilian informants to report any suspicions about fellow citizens to government agencies; as well as monitoring phone calls, keeping files on all individuals, and in true Green Scare fashion, flagging those who order vegetarian meals on flights.
Posted by SnitchWire at 3:02 AM