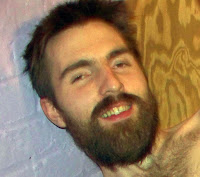 A few days ago we assisted in the circulation of a statement prepared by the New York Anarchist Black Cross, the Love and Resistance collective, the Aftershock Action alliance and a few other groups upset with the behavior of one Thadeus D. Umpster, aka Dennis Burke, pictured left.

For a quick review, this was all brought to such a pitch after incidents at a collective house Burke lived in ended in people going to jail because he called the police. Quite frankly, the semantics or power struggles or whatever don't really concern us as an editorial, because we don't live at the house and have no real business commenting on that kind of stuff. What we do know is that there was a dispute that became quite confrontational, and Burke called the police to leverage his own side in a personal matter and it ended with two people in a jail cell. This is snitching, ladies and gentlemen, plain and simple. Burke called the police five times in less than a month, using the State as a tool for intervention and a weapon of leverage. This makes him a hazard to radical communities everywhere and it made people afraid to be in their own home.

In his defense, Burke is correct in saying that another person in this situation called the police. This person, who ended up going to jail, is not an anarchist and will not be held up to the same standards. Anarchists solve issues without State intervention. A non-anarchist in a violent confrontation in which police may already be on the way is probably pretty likely to call the police themselves because to a non-anarchist, that is the only way to mount a socially acceptable defense. We regret and attempt to negate this kind of social conditioning, but it is not fair to hold someone to ideals they do not believe in, especially in a violent confrontation.


As many can see, this has been a bit of a hot story that generated quite a bit of debate. For us, it has been kind of a case study and a learning experience. A lot has been said about what is and isn't a snitch. Should Dennis Burke be listed amongst the likes of traitors like Brandon Darby or undercover pigs like Anna? Our short answer, without resorting to petty (but likely valid) character assassination, is yes. A long history of manipulation and abuse with a penchant for evading accountability is always suspect, but those sort of things do not completely evaporate all chances for revolutionary potential. Those are things that can hopefully be addressed and worked on, ironed out for progression towards being a better person and a better anarchist.

However, couple an abusive and manipulative history with the reactionary bullshit we have seen from Burke himself and the few supporters he still has, and we have not just a snitch "without a payroll" but a danger to all radical communities and an asset to enemies. Over the last few days, we have documented bad jacketing, an extremely serious offense and a common tactic used by people held accountable for cooperating with authorities. This is not acceptable at all and it puts people in serious, serious danger. We have also documented multiple accounts coming to his defense as circulating from the same IP address, which we interpret as "sketchy as fuck" in so many words.

What started as an accountability process has seemingly ended in a cyber melee and a real world ousting. We would urge anyone still supporting Burke to take a serious look at the situation at hand and realize that they are being manipulated and used as tools for an abusive individual to evade responsibility. Allegations that the groups that crafted the original statement aren't real or are only staffed by a few anti-Thadeus kids are completely false. We have examined eyewitness accounts from both sides, corroborated story elements with multiple sources, even gleaned some audio and we concluded that Thadeus D. Umpster/Dennis Burke is a snitch who called the police several times and eventually led two people to jail. In his reaction to this, there were possible cases of bad jacketing which we will continue to investigate and we deplore the wanton disregard for security culture by Burke and his "supporters" in openly posting individuals' personal information on the internet without consent during an accountability process.

SnitchWire would continue to advise, as we did in endorsing the original statement, "that Burke is shunned from working any further on anarchist projects or campaigns and definitely turned away from any kind of collective living situation." The State preys on these kinds of social schisms and abusive, dangerous personalities to destabilize radical communities. This was all much more than scene drama, and Burke should realize he is no longer welcome amongst radicals.

Case closed, next case.
Posted by SnitchWire at 12:50 PM