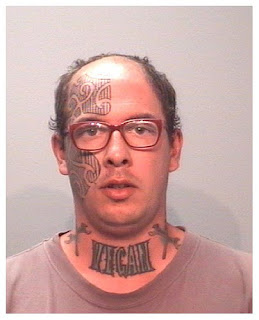 Informant Revealed: A.L.F. Suspect Set Up By His Brother

In his first written statement from jail, the accused A.L.F. "Lone Wolf" reveals new details about his case

In a new letter (excerpts posted below), the accused A.L.F. "Lone Wolf" Walter Bond addresses several lingering questions surrounding his case. Among them, the circumstances of his arrest, quotes made about him by "friends" to the media, and: the identity of the informant who set him up.

Bond sits in jail on arson and Animal Enterprise Terrorism charges, accused of being the Animal Liberation Front "Lone Wolf", responsible for three arsons at animal abuse targets in Utah and Colorado. To date, Bond has been charged only in the Denver Sheepskin Factory arson. He faces up to 30 years in prison.

Walter Bond was arrested after what court documents say was a set-up by a friend. The "friend" allegedly enticed Bond into a monitored conversation in which Bond allegedly admitted to three A.L.F. arsons. The entire set-up was orchestrated by the ATF. The informant had been identified to date only as someone Bond had not seen in 12 years. In his letter from jail, Bond reveals the identity of the informant, and other details of his arrest.

The details surrounding his arrest:

"The day of my arrest I was on my way to see my brother. We hadnt' seen each other for 12 years, and he had told me that he was coming to Denver to help our half-brother [name redacted] move. He had told me that he was bringing my nephews I had never met. I left [location redacted] thinking I was going to begin healing the very deep wounds of my shattered family. I was wrong. My brother [name redacted] had been working for the ATF since July 1st.

On my way to the hotel he was at, the police stopped me because I was on a 'bulletin'. They quesioned me mostly about veganism, and my tattoos. I refused to say anything except 'I have nothing to say'. They searched me and let me go. I later realized I was only released so that I could walk down the street and into an ATF set-up."

"I found out from a visitor today that Billy Jo has been spinning fanciful tales about me. First off, I was not at her house. Next, I am vegan as everyone that has ever met or known me can attest. I was not at a BBQ nor was I even at Jim and Billy Jo's house. I was simply arrested on their front lawn. In two years time I have spoken to Billy Jo a grand total of perhaps two-dozen sentences.... My guess is that given her shady nature the ATF scared her into trying to discredit me. Altogether predictable and honestly of little consequence to me. Those who know me know what I stand for."

On vegan food and support:

"I am being fed a vegan diet and of course the food is less than desirable. I have no money on my books and I can really use some for ramen noodles, envelopes, etc. Other than money and letters of support I don't need anything from the outside."

"Obviously I can not talk about my ongoing case / cases, but I will say this: the charges I face are serious. Accordingly so is the time that goes along with them. However nothing they can do to me can ever compare with what animals endure at the hands of speciesist human oppressors. Please use any means at your disposal to use whatever [illegigble] surrounding my case to bring awareness to the plight of animals. I am vegan and an animal liberation activist, and shall never relent in the fight for the total freedom of non-human animals."

After being denied bail, Walter Bond will likely remain in Jefferson County Jail (Golden, CO) until his trial. Write Walter Bond a letter of support: